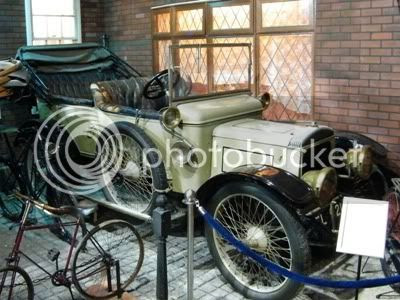 Daimler is Britain's earliest motor car manufacturer, and this is a typical late Edwardian car from them. It is fitted with Daimler's very successful 'Silent' Knight sleeve valve engine. The Knight sleeve valve engine was designed by Charles Knight, an American engineer, in the 1900's, and was quieter than a traditional engine as a sleeve was fitted between the piston and the cylinder wall.


The Daimler 12hp model was built in small quantities, as Daimlers of the time usually had a more powerful engine. This is believed to be the only surviving Daimler A12 12hp left in the world. The distinctive fluted top radiator is a Daimler trademark, and was still used by Jaguar when making Daimler badged cars in the 21st century
Posted by Richard Hannay at 09:57