Yesterday saw the 97th anniversary of Britain's worst rail disaster, which happened at Quintinshill, near Gretna Green, Scotland, on 22nd May 1915, resulting in the deaths of around 226, injuring 246 and involving five seperate trains. 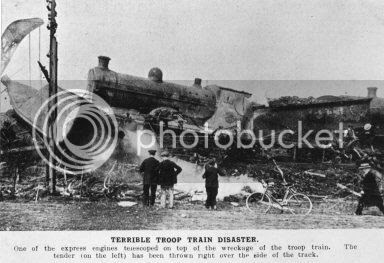 The crash occured on a set of four tracks - the two main line railway tracks, and a siding off each main line track. At the time of the crash, there was a goods train in one siding, an empty coal train in another, and a local passenger train was stationary on the up mainline to Carlisle. The signalmen in the Quintinshill Signal Box did not make the other signal boxes aware of this, or make indications on the railway signals that the line was blocked, and so there was no warning to the troop train carrying the 1/7th Battalion Royal Scots of the stationary train in it's path. At 0649 the troop train collided head on with the stationary local passenger train. Just as those not already killed by the first collision were escaping from the wreckage, an express train powered by two steam locomotives ploughed into the wreckage which was strewn across the previously clear down mainline to Glasgow, killing and maiming those that were on the railway line, and causing the express train to crash to, the two crashes subsequent damage also extending to the goods train and empty coal train. The fires from the steam locomotives involved caused a fire, and leakages from the gas powered lighting system used on the wooden carriages ignited, resulting in a very large fire spreading to the crash wreckage. 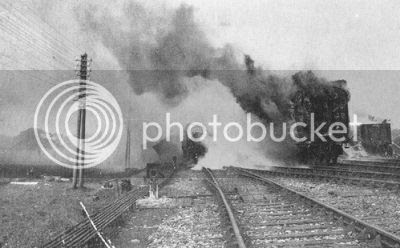 Despite the best efforts of local fire brigades, the fire wasn't completely put out until the next day. Two were killed on the local passenger train which was struck by the troop train in the first collision but none were injured,  and also the engine crew of the troop train were killed, and seven were killed and fifty-four injured from the express train. The vast majority of the deaths and injuries were from the troop train - the exact figures are not known as the Regiment's roll list was destroyed in the crash and subsequent fire. Many bodies were either unrecogniseable or completely destroyed by the fire. Four children's bodies were found but they were not identified or claimed, possibly stow aways on the troop train. The two signalmen were convicted for their role in the disaster, however both returned to work for the Caledonian Railway after release.
Posted by Richard Hannay at 07:00