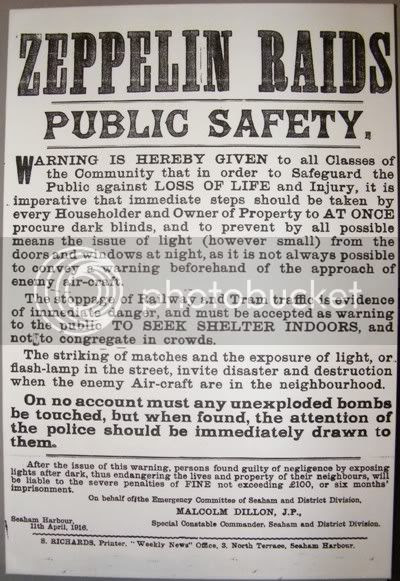 This poster, issued by the Emergency Committee of Seaham and District Commission on April 11 1916. It tells the public of what to do in, and when to take action and shelter from, an attack by Zeppelins and other aircraft. The threat to the British public from Germany in the First World War was no light matter - in December 1914 Hartlepool, Scarborough and Whitby were bombarded by German ships to provoke a response from the Royal Navy, and Zeppelin and Aeroplane raids were to occur throughout the First World War - London was on the verge of a firebombing offensive in 1918 when it was called off at the last minute as it was felt it would affect the chances of a Peace Treaty when the time came, as by this time the war was going very badly for Germany
Posted by Richard Hannay at 09:34