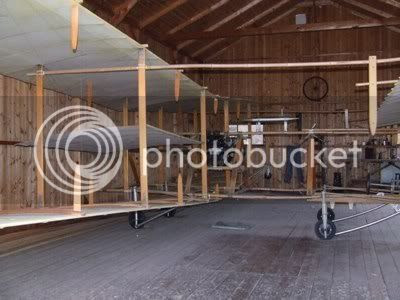 The Roe I Biplane was the first powered aircraft to be designed, built and flown in the UK. It was designed by Alliott Verdon Roe to claim a prize offered by the Brooklands Automobile Racing Club and based it on a powered model with which he won a £75 Daily Mail prize at Alexandra Palace in 1907. When first built it was powered with a 9hp JAP engine, but was too underpowered to get airborne, but Roe borrowed a 24hp Antoinette engine with which he was able to get the Roe I airborne, for the first time completing a short hop off the ground on June 8 1908. Unfortunately it was damaged beyong repair after several more hops when Brooklands race track attendants dropped it when lifting it over a fence. This non-flying replica was built in 1988 and is housed in a replica of Roe's shed built for the aircraft
Posted by Richard Hannay at 08:22