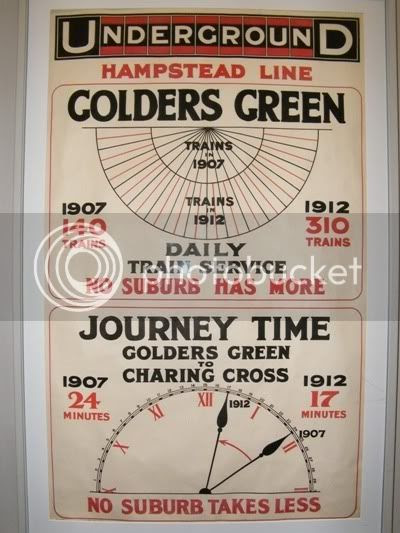 This poster extols the virtues of Golders Green Station by showing the journey times and train frequencies into central London in 1912 since the opening of the station in 1907 - the early London Underground companies were often encouraging people to move to the suburbs, where they could travel via the companies into London for work. I used to live at the end of the Northern Line and travel through Golders Green often - it's one of my favourite stations, as on my trips into central London it was the last open air station before going underground, and so on the way back home would be my first gasp of 'fresh' (well, fresher than that in central London and underground) air when the doors opened. It also still shows it's Edwardian origins despite modernisation, especially the original roof supports
Posted by Richard Hannay at 17:31