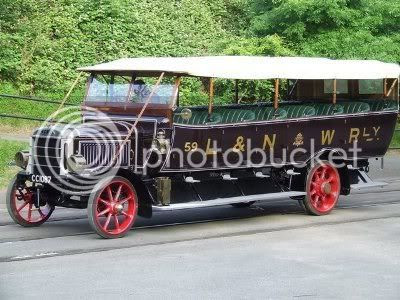 A common sight on British roads in the early 20th Century, the Charabanc (sometimes seen written down as 'Char-a-banc', and pronounced 'sharra-bang', and from the French term 'char a bancs' meaning carriage with wooden seats) was a common way of moving large numbers of people, often on outings to the seaside or countryside, or just as an early bus service. Charabanc bodies were very popular as they meant a large amount of people could be seated in a relatively small area, seated in rows of benches with an entrance/exit for each row, and as they were open topped (usually with a foldable canvas cover, as seen here), they were lighter and cheaper to build than a motor bus with glass windows and tall wooden bodywork. 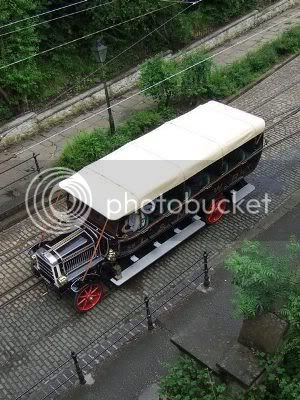 The railway companies often used Charabancs for local services, and this Charabanc is such a vehicle. Built in 1914 by the famous bus and lorry company Leyland for the London & North Western Railway, from July 1914 it operated a service from Colwyn Bay Railway Station to Rhos on Sea Pier. When the First World War broke out, the Charabanc was requisitioned by the War Department and used for transporting troops, as many Charabancs were. After the war, it was used as a goods vehicle, but was restored by Mike Sutcliffe who has restored a number of early Leyland busses, and is seen here at the Crich Tramway Museum Edwardian Weekend in June 2008
Posted by Richard Hannay at 16:03