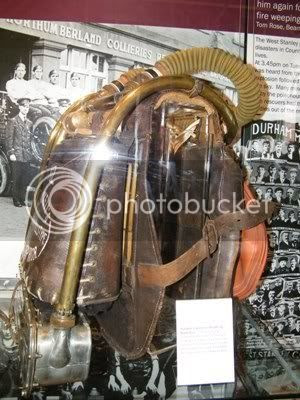 This unusual looking device is an example of the Blackett's Aerophor, a portable breathing apparatus (the name 'Aerophor' is derived from the Greek term for 'air carrier'). It uses liquid nitrox to enable the wearer, using a mask, to breathe properly when breathing the normal air where the wearer is would be hazardous, and was widely used by mine rescue teams where the air may be dangerous to breathe, possibly with no or too little oxygen. It was invented by Colonel VE Blackett in the Durham area in 1910.

It was filled immediately before use with five and a half pounds of liquid nitrox which contained at least 50% oxygen in a heat insulated tank, and at the bottom of the backpack contained a canister which was filled with two pounds of either potash or soda. The front of the Aerophor, which from what I can gather is on the right side of the apparatus in my photograph, was the breathing bag
Posted by Richard Hannay at 08:01