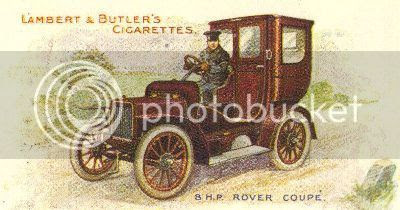 This is 6 of 25 in Lambert & Butler Motors Series of Cigarette Cards, issued in 1908. From the back of the card;


"This shows one of the well-known Rover Cars, the 8hp Coupe, a car which has a considerable vogue amongst doctors and other professional gentlemen. The car is famed for the simplicity of its construction and for its reliability. In the Tourist Trophy Race of 1907, termed the blue riband of the motoring world, the Rover won easily, defeating the cream of British and continental cars"