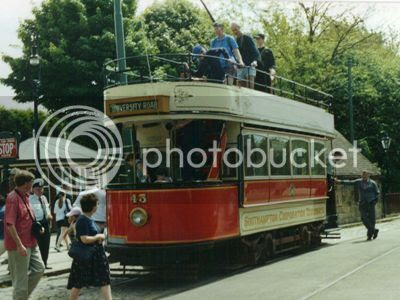 This is Southampton Tram No 45, built in 1903 by Hurst Nelson for the Southampton Corporation Tramways, and is a typical double deck, open top electric Tram of the Edwardian era as seen in most large towns and cities in the UK. After many years of service, it was retired in 1949, and promptly bought by the Light Railway Transport League after a tour of Southampton's Tramway network. It is slightly lower than most Trams of this type as it had to be able to go under the Bargate arch in Southampton, which restricted the size of the Tram. It also, to cater for this restriction, has the seats on the top deck located down the centre of the Tram facing outwards, this is called 'knifeboard' style. The upper deck placed strain on the Tram's body which, as originally built, the three windows on each side, so within four years Tram 45 and the 11 other Southampton Trams of the same design were rebuilt with four windows on each side as seen today, so Tram 45 now represents it's 1907 (at the latest) condition onwards.

This was the first Tram to be privately preserved in the UK and kick-started the preservation of Trams. The Wikipedia page for the Southampton Tram network has a good description and images of the problems faced by the Bargate arch, and how they were overcome - http://en.wikipedia.org/wiki/Southampton_Corporation_Tramways
Posted by Richard Hannay at 09:00