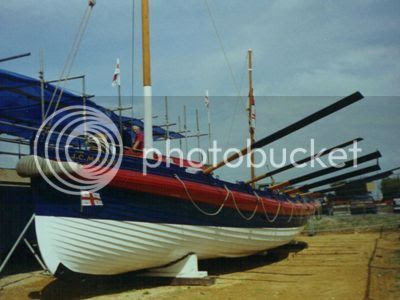 This is a fine example of an Edwardian Lifeboat of the Royal National Lifeboat Institution. Built in 1904 at the Thames Ironworks and Shipbuilding Company in Blackwall, east London, this is a 'Liverpool' class Lifeboat, 41 feet long and equipped with a sail and sixteen oars to power her, with two drop-keels for when the sail was in use. Unlike many Lifeboats of the time she was non-self righting, which meant that if capsized would not self-right, but her design was instead more stable than self-righting Lifeboats of the time.

The 'JC Madge' was based at Sheringham on the north Norfolk coastfrom 1904 until 1936 when replaced by a Motor Lifeboat. Her crew continued to man the Lifeboat during the Great War, and in 1916 stood by a steam ship, the SS Uller of Norway all night in stormy seas, snow and gale force winds, as the ship had foundered on sands off the coast, and in the morning escorted it to the Humber Estuary 53 miles away.

In 1988, the 'JC Madge' was purchased by the Sheringham Museum Trust, which since being sold out of service had been converted into a pleasure craft, and has since been restored to original condition. This old photograph of mine shows the 'JC Madge' on display in Sheringham, with the Motor Lifeboat that replaced it, and the Lifeboat that replaced that, in 1998 to commemorate 150 years of an RNLI Lifeboat at Sheringham. It is now on display in 'The Mo' Sheringham Museum - http://www.sheringhammuseum.co.uk/
Posted by Richard Hannay at 08:45