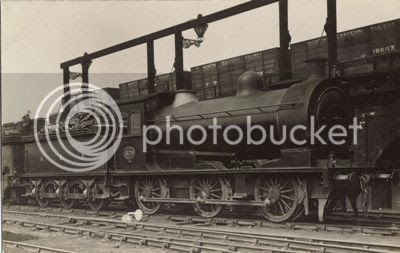 This lovely photograph, a scan of an original postcard in my collection, shows P2 Class Locomotive 1678, built at Darlington Works for the North Eastern Railway in 1904. The P2 Class of locomotives were 0-6-0 tender engines, with all six wheels on the main part of the locomotive (the wheel arrangement excludes those on the tender) being coupled together to provide traction. 50 P2 Class locomotives were built, a larger-boilered version of the P1 Class locomotive, to haul longer and heavier freight trains following a fact-finding trip by the North Eastern Railway to the USA to see the railways there. A slightly modified version, the P3, which was nearly identical in appearance to the P2, was later introduced and 115 of these were built, proving the usefulness of this design. Redesignated the J26 and J27 Class respectively from 1923 onwards, they mostly served until the end of steam in the UK in the 1960's.

This particular engine, 1678, entered traffic in December 1904 and was then based at Newport shed until 1925 - the photograph is believed to have been taken at Newport
Posted by Richard Hannay at 10:00