In Affectionate Remembrance of the Derby Horse Cars, 1904 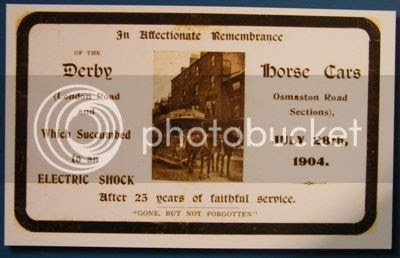 With the retirement of horse drawn trams when electric ones were introduced, the sense of occasion was marked by these postcards - not Derby specific, but issued to many towns and cities which were introducing electric trams almost identically, aside from the change of location and dates, with even the same image being used. The card reads;


'In affectionate remembrance of the Derby Horse Cars (London Road and Osmaston Road Sections) which succumbed to an ELECTRIC SHOCK July 28th 1904 after 25 years of faithful service
"GONE BUT NOT FORGOTTEN"'
Posted by Richard Hannay at 16:17