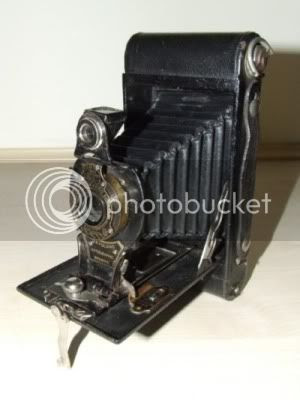 One of my favourite posessions, this is my 1913 model Kodak No 2 Autographic Camera. Mine was built in 1917 (the interior casing has the patent updated every few months stamped on it, and the latest date is early 1917 so was made in the summer of 1917 at the latest). A flap on the back side and a 'stylus' is a very interesting feature - this was so that after you took a photograph, you would open the flap on the back, write a caption on the film using the stylus (something like 'my brother on his new bicycle'), hold the back of the camera up to the sunlight for a few seconds, and when the film was developed the photograph would have a caption!

Unfortunately modern film doesn't allow for this, however i'm very fortunate that I can actually use modern film in it and so can continue to enjoy it nearly a century after it was made. It takes 120mm film, I personally use Ilford black and white film, and I can take 8 photographs per film. It's not something I use for everyday photography owing to the cost, but I still use it as often as possible for photographs of period subjects, and I share the results on the internet (mainly on my Flickr feed, http://www.flickr.com/photos/roblangham/ ), and will do so on here too. To start off with, here's a taster for the next post - the Edwardian 1913 Motor Garage at Beamish 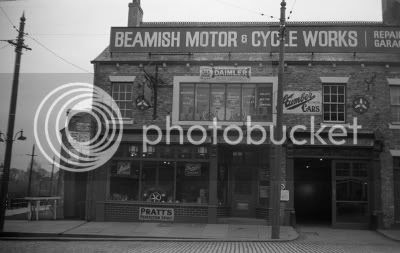