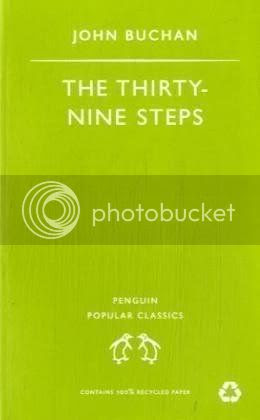 The Thirty Nine Steps, published in 1915, is one of my favourite books, and a real classic. Set in May and June 1914 just before the outbreak of the First World War, the book is narrated by the main character, Richard Hannay, a Scotsman who emigrated with his family to South Africa at a young age, became a mining engineer, and travels to London in search of excitement. He soon wearies of what London has to offer, but excitement turns up soon enough when a man who lives in the same apartment building fearing for his life and describing a plot he uncovered to assasinate the Greek premier who was attempting to smooth over problems in eastern Europe, and ultimately steal the battle plans for the Royal Navy. Sceptical at first, the story is confirmed when the spy is found dead in Hannay's flat.

Now on the run from both the German spies, wanting to kill Hannay for the secret he now knows, and the British Police suspecting him of the spy's murder, Hannay goes up to Scotland by train, and does his best to evade capture by rail, foot, a succession of motor cars, and by elaborate disguise and bluff. I won't ruin the rest of the story - however I will say that if you have seen any of the adaptations of the book, from the 1935 Hitchcock movie to the 2008 BBC television movie, the book is completely different, and in my view so much more exciting and evocative of the era
Posted by Richard Hannay at 19:56