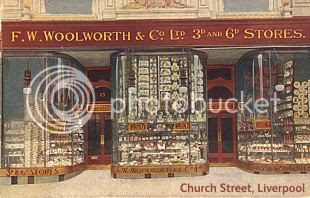 Woolworths will be a familiar name to many readers - the first British Woolworths store opened in Liverpool in late 1909, an American chain originally. The high street stores featured in most if not all British towns and cities until it closed down just under 100 years later, the last stores closing in January 2009
Posted by Richard Hannay at 09:30