Firstly, apologies for the lack of updates recently, work and real life have got in the way but hope to get back up to speed soon - i've certainly got plenty of material! 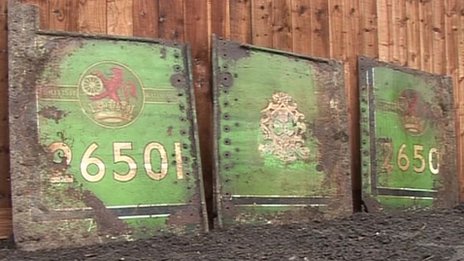 This post was sparked by a news article yesterday of the interesting discovery of cab sides from a 1904 electric locomotive found in a pub garden in Choppington, in north east England. The locomotive was North Eastern Railway number 2, an ES1 (Electric Shunting 1) BO-BO class electric locomotive built in 1904 for use on the Newcastle Quayside branch between Trafalgar Yard and the Quayside itself. Number 1 was preserved and has been covered on the blog here, with photos here;

The identical No 2 was the subject of an attempted preservation after they were withdrawn in 1964 but unfortunately this failed, and was scrapped at the aptly named Choppington. The discovery of these panels is an amazing find, and there are photos here;

Hopefully they will go to a good home, and nice to know that a bit of No 2 lives on. According to a post on the LNER Forum, the other cab side with NER crest was at a model railway club, but i'm unsure of it's present location
Posted by Richard Hannay at 12:08