On Monday evening I was lucky enough to watch 'The Great White Silence' on one of the few cinema screenings in my city, where it was on for just four days. Originally released in 1924, the film has been digitally restored and given a new soundtrack by the British Film Institute and is being shown in cinemas around the UK, as well as a DVD release at the same time. Despite being released in the 1920's, all the footage in the film was taken in 1911 and 1912, and is the official record of Captain Robert Falcon Scott and the Terra Nova Expedition to Antarctica and race to the South Pole.

The footage was taken by Herbert Ponting, a famous early photograph and film maker, and as well as covering the expedition the film also contains lots of wildlife shots, especially of penguins and seals - understandably considering that he was paid large amounts of money to take the footage and it would have been of immense interest to the British public - although in the modern day we are well aware of what a penguin and a seal look like, and have most likely seen them for ourselves, the Edwardian public hadn't. That said, watching the footage through modern eyes is still fascinating, and funny, especially when Herbert Ponting is filmed (presumably by an assistant) being attacked by penguins whilst walking amongst them taking photographs, and also one scene cut short when a seal starts heading toward him, intent on attack! One scene is devoted to how the Adelie Penguins 'court' - the female penguins keeping together while male penguins give 'the eye' to their chosen female.

Another particularly memorable scene is where Ponting is filming killer whales from the deck of 'Terra Nova', the ship used in the expedition. As Ponting is filming, the killer whales are moving in on a baby seal in the water close to the ice. The seal's mother repeatedly enters the war and attempts to get her baby on her back to get it out of the water and hopefully out of harms way, but fails, with the seals on one side of the screen and the killer whales getting closer to closer. It seems as if there is no hope for the baby seal, and possibly it's mother, until a trail of smoke bursts from the left side of the screen as a harpoon is fired from the 'Terra Nova' by the crew, hitting one whale which then dives beneath the water, followed by the rest of the pack, saving the seals lives. It's a fantastic scene and it shows a lot of compassion from the crew of the 'Terra Nova', who weren't going to standby and watch a baby seal be eaten, which is rather ironic as earlier in the film Ponting describes how the Expedition crew had been eating seals for sustenance.

The footage of the Terra Nova Expedition was for me the most interesting part - including showing the hut built for the landing party, which is still at Cape Evans untouched, with original food, clothing etc and was the subject of a superb documentary hosted by Ben Fogle earlier this year.

I am very interested in Antarctic exploration, which, coupled with my interest in early film made this a great experience, but I can highly reccomend the film to anyone with an interest in anything 'vintage'. The new soundtrack is very fitting and deals with what is a very emotional subject very well. I look forward to buying the film on DVD and enjoying it again.

For more information on the film, visit the BFI's page here - http://www.screenonline.org.uk/film/id/1398645/index.html

To buy the film, you can do so via the BFI filmstore, which also sells other early films, here - http://filmstore.bfi.org.uk/acatalog/info_19662.html

Posted by Richard Hannay at 17:39 No comments:

Thanks to the British Film Institute I saw this 1913 comedy film today. Fred Evans, a music hall performer before his days as a film star, plays 'Pimple', a hapless character who appears in various guises in the Pimple series produced by Fred Evans and his brother Joe. The idea for 'Pimple's Battle of Waterloo' came after Fred walked past a cinema showing 'The Battle of Waterloo', an early epic. A month later, the latest 'Pimple' was released. Pimple is Napoleon, starting off crossing the Alps, and then surviving an assassination attempt on his way to 'Parree-e-e' - not from a British spy, but by a Suffragette, who Napoleon and his entourage then flee from! Napoleon and his army then get the train to Waterloo, including his horse, which is actually a very funny one-man pantomime horse. As you'll already know, Napoleon lost the Battle of Waterloo, after an advance from the 'Old Guard' (played by Boy Scouts!), and then surrenders and has to leave France forever.

Unfortunately i'm not aware of this film having ever been released on VHS or DVD, but I viewed it at my local BFI Mediatheque for free. For more information on the film, here is the BFI's page on it - http://www.screenonline.org.uk/film/id/533804/
Posted by Tommy Ticklers at 20:26 No comments: 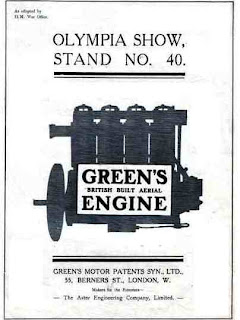 1910 advert for the Green Aero Engine Co. Relatively unknown today, Green produced a large amount of aero engines pre-WW1, and were very popular in the UK for their high performance. For more information on the Green Engine Co, see the Wikipedia entry here - http://en.wikipedia.org/wiki/Green_Engine_Co
Posted by Tommy Ticklers at 21:25 No comments: